To Save Cost US Drillers Cannibalise Idle drilling rigs

To Save Cost US Drillers Cannibalise Idle drilling rigs, this seems to be the new turn of events as rig count rates drops weekly 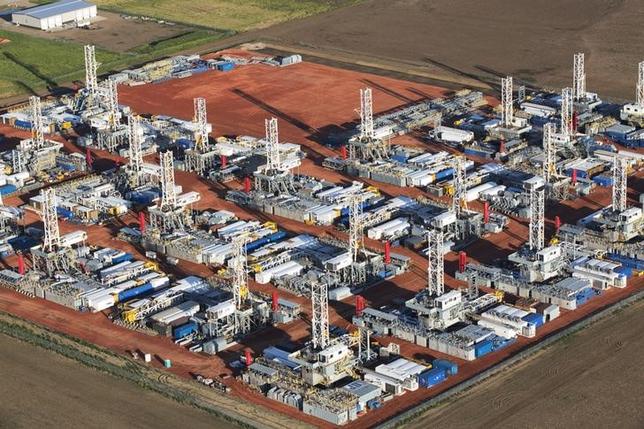 Cam Hewell runs Premium Oilfield Technologies, a small company that makes equipment and spare parts for drilling rigs from North Dakota to Texas. Like his rivals, he is trying to withstand the worst oilfield downturn in six years, but they face a vexing obstacle: cannibals.

In a bid to save cash, rig owners are cannibalizing parts such as motors and drill pipe from idled rigs to fix 800 active ones in the U.S. when stuff breaks.

In good times, they would buy new equipment from companies like Hewell’s or industry leader National Oilwell Varco Inc when parts fail. Now, they just pick over any of about 1,100 rigs idled by the price crash.

Cannibalization is so widespread in this downturn that services companies and others say even after oil prices recover it will take six months or more to see a significant rebound in drilling and production – a timeframe that will allay fears of a quick uptick in drilling promptly sinking prices again.

NOV has said so many rigs are idled that firms could cannibalize drill pipe for up to a year before placing new orders.

“(Cannibalization) will slow the industry’s ability to ramp the rig count back up so it will delay the production response from oil prices,” said James West, oilfield services analyst with Evercore ISI.

While there are no official statistics available, cannibalization has been so pervasive in this slump that industry experts say it is possible a majority of the 1,100 rigs that are not working have been scoured for parts.

Land rig utilization is hovering around 60 percent for larger U.S. drilling contractors, according to data from Tulsa, Oklahoma-based Helmerich & Payne Inc, which has a higher utilization rate because it has a fleet of newer rigs.

The slowdown in drilling prompted by a 50 percent slide in crude from $100 a barrel last year is expected to cause a drop in U.S. oil output. The Energy Information Administration sees U.S. crude production falling 4 percent to 8.8 million barrels a day in 2016.

There are lots of spares available because the U.S. rig fleet was near a 15-year high when prices started to tumble.

While most parts are scavenged from onshore rigs, offshore driller Noble Corp Plc took off a helipad and the floor from a crew cabin from a rig that was slated for retirement and used the parts to make improvements on a rig contracted to Hess Corp.

NOV has said that its sales of spare parts were being hurt by companies cannibalizing parts from idle rigs.

“Cannibalizing is not an uncommon practice in the industry, and more so on land than offshore, but it has gone up in the downturn because more rigs are being retired or idled now,” said Grant Almond, senior vice president of technology and product development at National Oilwell.

While that may hurt the Houston-based company’s business now, a rebound in orders is expected when exploration and production companies start investing again in new wells and putting rigs back to work.

Sales at the National Oilwell’s spare parts and repair business, the rig aftermarket division, fell 16 percent to $657 million in the last-reported quarter.

Stacey Locke, chief executive of contract driller Pioneer Energy Services Corp’s, said the majority of the 25 rigs the company had divested in the earlier part of the year were sold for parts and pieces to smaller drilling contractors and equipment dealers. His company also keeps some refurbished pieces on standby.

Investors, still seeing an oversupply of rigs, and are encouraging companies to scrap more rigs to halt the slide in daily rental rates, now around $20,000, depending on the rig’s speed and power.

“Companies have to continue to scrap idle rigs and do all that they can to balance supply with demand,” said Robert Thummel, a portfolio manager at Tortoise Capital Advisors.

However, the scrapping of more rigs would likely increase the number of those ripe for cannibalizing, analysts said.

To escape the downturn gripping the U.S. shale market, Premium Oilfield is expanding in the Middle East.

“Our U.S. domestic customers, the oil producers, are shutting off all capital spending on just about anything,” said Hewell, whose Houston company is backed by Houston-based private equity firm Global Energy Capital LP.

(Reuters and Reporting by Anna Driver and Swetha Gopinath; Editing by Terry Wade and Alan Crosby)