You are here: Home / Energy Business / Toyota hits it big, raises forcast for the whole year

Toyota hits it big, raises forcasts for the whole year 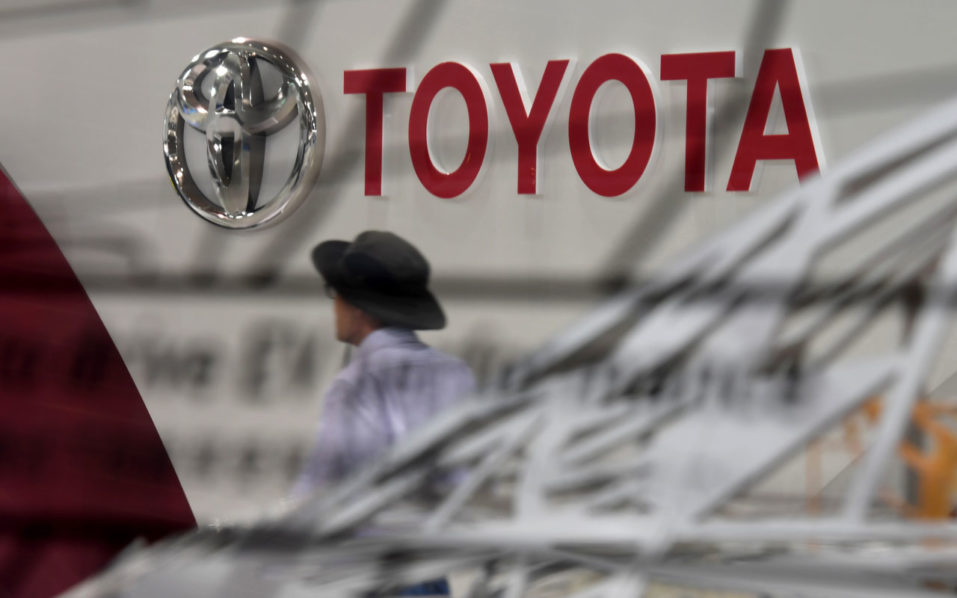 According to TheGuardian Japanese car giant Toyota Tuesday reported a rise in first-half net profit and raised its forecast for the whole year, citing a cheaper yen and cost-cutting efforts.

The Prius maker now expects to bank a net profit of 1.95 trillion yen for the fiscal year to March 2018, up from an earlier estimate of 1.75 trillion yen.

During the previous fiscal year, Toyota suffered its first drop in annual profit for five years, which it blamed on the cost of customer incentives in the key US market.

“Toyota has benefited from a weak yen, but growing incentives in North America have pressured its profit,” said Satoru Takada, an analyst at TIW, a Tokyo-based research and consulting firm.

“Foreign exchange will remain a decisive factor for the second half,” Takada told AFP before the announcement.

The level of Japan’s currency against the dollar and other units is a key factor in Toyota’s competitiveness abroad and in the value of profits it earns abroad.

The yen has moved sharply in recent years, surging after Britain’s shock vote to exit the European Union boosted demand for the safe-haven currency.

The trend briefly reversed course after Donald Trump’s November US presidential election victory boosted the dollar against the yen and other currencies.

North American motorists continue flocking to buy pick-up trucks and SUVs, while the prices of used sedans continue to slip, he said.

“There are many things we must do,” such as reducing incentives in the US market, he said, but added the business environment stayed “tough” as raw materials were also at high levels.

Japan’s auto industry is facing uncertainty over Trump’s drive to support US firms over foreign imports, a stance that has raised fears of a global trade war.

Trump has targeted Toyota with strong criticism of its ongoing project to build a new factory in Mexico, threatening it with painful tariffs.

The US leader, who left Japan for South Korea earlier Tuesday after winding up the first leg of his Asian tour, lashed out at the US trade relationship with Japan while in Tokyo.

Toyota senior executive Nobuhiko Murakami kept mum on Trump’s remarks, saying such an issue and views have existed “for a long time” and his firm has no comment on the subject or US policies now.

Last week Honda Motor revved up its annual profit outlook on strong motorcycle sales and a lower yen, but the more upbeat figures still represented a drop from the previous year.

Nissan is scheduled to report its first-half results on Wednesday after it suspended all domestic production due to an inspection scandal.

The firm restarted production on Tuesday after apologising to its customers.

Oilfield drilling is a process of boring hole into to the earth crust for natural gas and oil. To do this, a long bit attached to a "drilling string" is used. The bit varies in diameter from five to 50 inches. After each section is drilled, a steel … END_OF_DOCUMENT_TOKEN_TO_BE_REPLACED

A chemical flush is a process where pressure is applied to empty a pipeline using appropriate chemicals to suspend, disperse and remove accumulated materials. After this process, the pipelines are given a final flush with clean water and chemical … END_OF_DOCUMENT_TOKEN_TO_BE_REPLACED

Dispersants are chemicals that are sprayed especially on a surface oil slick, to break down the oil into smaller droplets that are distributed or spread over a large volume of water which are more readily mix with the water. Dispersants do not reduce … END_OF_DOCUMENT_TOKEN_TO_BE_REPLACED

Hose Guard is a high-quality plastic specifically designed for hose protection in almost every environment. Flexible, elastic, smooth and with a wide temperature range, it ensures an optimal solution against abrasion and shocks. It is made of … END_OF_DOCUMENT_TOKEN_TO_BE_REPLACED

Epoxy is the major Marine paints and coatings supplier in Nigeria. We carry the best brands in … END_OF_DOCUMENT_TOKEN_TO_BE_REPLACED

These are frequently asked questions about Lubricants, please sen an email and an Expert from our … END_OF_DOCUMENT_TOKEN_TO_BE_REPLACED